The Parishes of Charles Borromeo are under the care of the Franciscan Friars (Order of Friars Minor). 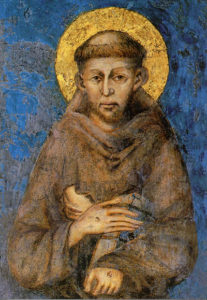 The Franciscan Friars (OFM) where founded by Saint Francis of Assisi in 1209. Originally Irish friars came to Australia as individual priests to serve Catholics in Australia but in 1879 the Friars were given an area in eastern Sydney to establish a Franciscan Mission. Paddington, Edgecliff and the Waverley Parishes were all part of the original Franciscan Mission area.

In 1939 the Australian Franciscans were established as a Province.

The Franciscans live according to the Gospel values of Jesus Christ after the example of St Francis and St Clare. Other Famous Franciscan saints are St Anthony of Padua and St Bonaventure. Others such as St Thomas More were secular Franciscans.

The Franciscan Friars have had a long tradition within Australian Catholic parishes, ever since Fr Bonaventure Geoghegan was installed in 1838 as the first – and only -parish priest for Melbourne. In reality, his district covered all of Victoria. Since then, friars have been highly involved in many parishes around Australia, New Zealand and Singapore/Malaysia, leaving their unique Franciscan spiritual mark.